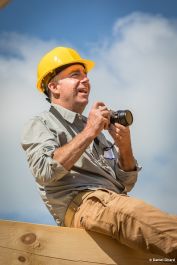 Eric Morley was quite literally born into construction. 54 years ago, the Liberian Mining Company (located in Bomi Hills, Liberia, in western Africa) wished to purchase a new Caterpillar D-8 tractor. There was a trade-in involved, and as is often the case, both parties had not yet reached an agreement as to the trade-in value. Because Bomi Hills was a company town, the mining company also owned the hospital which boasted a new birthing center. The salesman representing the Caterpillar Tractor Company mentioned that he and his wife were expecting a baby, and a smile spread slowly across the face of the mining company’s accountant, he turned to his co-worker and asked: “exactly how far apart are we?” Everybody laughed, they shook hands and the deal was sealed. The man selling the D-8 tractor was Eric Morley’s dad and Eric was part of a construction deal before he was born.

Born in Monrovia, Liberia, Eric and his family moved to Libya but were kicked out of Tripoli in 1969 as a result of Colonel Gadhafi’s coup d’état. They went on to live in Switzerland and France for a decade, and landed at the University of North Carolina at Chapel Hill for his undergraduate education, earning his MBA from Appalachian State University in 1992. He is a lifetime Timber Framers Guild member, is a licensed General Contractor, teaches an AIA continuing education course on timber framing, and is a published photographer.

Eric has three decades of experience in the wood industry, including 21 years as an owner of two timber frame companies. He would like to think that he inherited his love of wood from his grandfather’s cousin, Mr. Clair Young, who was a carpenter. The story goes that Young was so strong he could sink his thumbs into a 2x4. Morley admits to trying (and failing) more than once…and rationalizes that today’s kiln-dried wood must be a lot harder than yesterday’s freshly-sawn lumber.