This course is offered as a comfortable space to learn the basics of timber framing for people who may not feel welcomed in the almost-uniformly male culture found in construction. It is specifically and only for women and gender non-conforming folks and will be taught by two women timber framers.

Students should expect to come out of this class with the knowledge and experience they need to take on a small timber framing project of their own. We will cover the square rule layout technique - a traditional American way of fitting timbers together with mortise and tenon joinery - and students will lay out and cut a small frame using the square rule approach. Instructors will guide them through safe hand tool practices, light power tool options, and finally, the raising of the frame. Throughout the course we will discuss relevant topics like ordering timbers and finishing techniques, and, as time allows, we will also cover tool sharpening and making your own pegs.

NOTE: This course begins early with a special 2-hour welcome lecture by the instructors. Join instructors Liz and Shannon at the Heartwood School at 5 p.m. on Sunday, June 19. 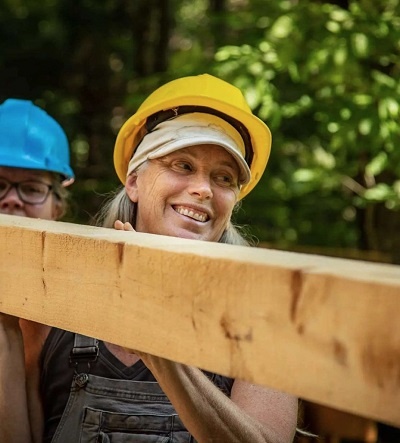 Liz Johndrow has been a hands-on learner all of her life. In 2004, with an earlier background in carpentry, she began to focus on natural and earthen construction: straw bale houses and timber framing, natural plasters and earthen floors, and cob and adobe construction. She founded her business, Earthen Endeavors Natural Building, in 2009 and launched TERRA Collaborative in 2014, formalizing the work she had been doing in Nicaragua since 2011. Liz works on homeowner building projects large and small, teaches natural material-based building skills in workshops and apprenticeships throughout the United States and Central America, and has been a frequent presenter at international development and natural building conferences. She has worked with organizations such as Yestermorrow Design-Build School in Waitsfield, Vermont; Red Feather Development Group in Flagstaff, Arizona; and Community Rebuild in Moab, Utah, as well as various local organizations throughout Central America.

Shannon McIntyre was raised in southern Rhode Island in a town teeming with craftspeople. It turns out that "McIntyre" means "son-of-the-carpenter," and so, assuming she was destined for the chisel, she applied for an apprenticeship at Heartwood in 2011.  Her love of timber framing was solidified here, and the following year, she started working at TimberHomes Vermont, a cooperative framing company where she's worked continuously ever since. She became an owner at TimberHomes in 2016. Shannon has taught timber framing in North Carolina, Massachusetts, New Hampshire, Costa Rica, and at the Yestermorrow school. Shannon lives in Montpelier, Vermont, with her partner Alec, their two young children, and their dog, Chancho the Irresistible.