This traditional framing technique is enjoying a healthy revival - the post and beam frame is exposed on the interior and is compatible with large open floor plans. The traditional mortise and pegged joinery is a joy to make as well as to live with, and is stronger than conventional framing. Heartwood has incorporated timber framing in all of its building projects. In this class, we will lay out and cut the joinery for a complete frame and assemble it, followed by an old fashioned "barn-raising."

We will be teaching the square rule approach, a traditional method that allows one to easily use timbers of inconsistent dimensions or squareness, which is how they would come from a sawmill. Modern production timber framers use planed timbers and expensive machinery not readily available to many builders, while we will be using tools and materials that many carpenters already have or which can be found locally for a minimal investment yet give results of the highest quality. 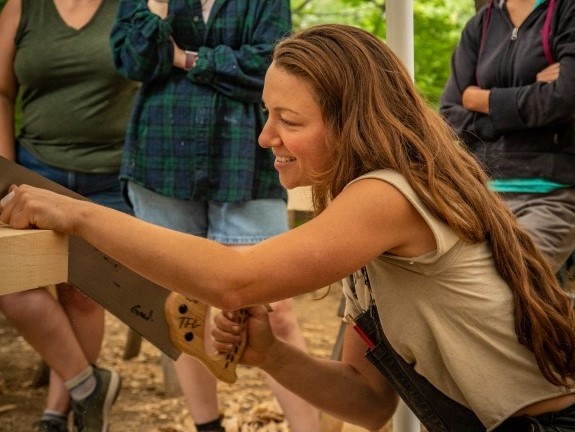 Ariel Burns has been working in the world of building since her introduction to it in 2012 in Western North Carolina. She has explored the different realms of construction: backyard natural building, home renovations, high performance/green building, conventional carpentry, and traditional timber framing. Her career has included numerous natural building adventures alongside her mentor and cohort Liz Johndrow of Earthen Endeavors. In recent years, she has taught timber framing and natural plasters & finishes workshops with Liz all over New England and beyond.
In 2016, Ariel landed herself at a sawmill-based timber frame shop in Central Maine. Nowadays, she splits her time between the sawmill and the boatyard where she resides. When at the boatyard, she's building high-end treehouses and outbuildings. When at the sawmill, she makes sawdust alongside a motley crew of framers there, known as Maine Heritage Timber Frames. She currently lives in midcoast Maine with her pet rabbit Willow. When not at work,  Ariel teaches yoga and plays drums in her heavy metal band. 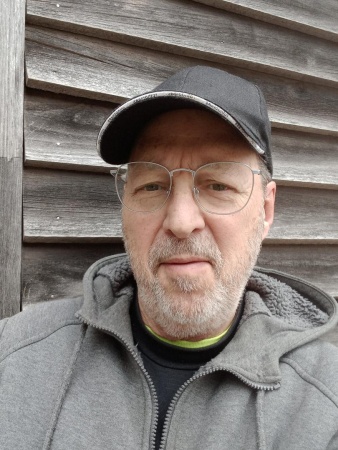 Dave Carlon's interest in timber framing began after obtaining his degree in wildlife biology and holding a position of Forest and Park Supervisor for the Massachusetts Department of Environmental Management for several years. During a 1976 visit to the Hadley Farm Museum, he discovered the timber frame that housed the museum, and there began a lifelong development of a skill of the hands, mind, and heart.

Dave has visited and studied historic timber frame structures in the United States, England, France, Sweden, and Norway, and has been timber framing professionally since 1984. This work involves restoration of historic building as well as the design (hand drafting and AutoCAD) and construction of numerous timber frames over the years, using traditional hand and modern tools.

Building is certainly utilitarian and necessary for survival, and timber framing techniques are too cool not to share, so teaching several workshops a year has been part of Dave's life since 1985. Currently a regular collaborator with Brunswick Timber Frames, Inc., Dave continues his timber framing work. Teaching the craft over the years and working with students to master the basics is his way of passing the craft along to others.

Kyle Murphy lives in Lynchburg, Virginia, where he has been timber framing for 13 years and has owned and operated Falling Acorn Timber Frames for 11 years. He was first introduced to timber framing while working for a millwright, restoring historic gristmills. Through this work, he fell in love with the beauty, craft, and longevity that timber frames offer.

Soon after, he attended Fox Maple School of Traditional Building, and subsequently other workshops up and down the east coast, devoted to continuing to learn the traditional craft. He served as a project manager for the Hidden Trace Farm Community Building Project in 2020 as well as serving as an instructor on several other Guild projects.

Neil Godden has been a timber frame contractor in western Massachusetts specializing in building traditional timber frames using primarily hand tools since 2000. Neil received his Civil Engineering degree from the University at Buffalo in 1996. Soon after, he completed an apprenticeship under master builder Jack Sobon and he has been in love with the craft ever since.

Neil demonstrates a passion for timber framing in all that he builds, and this is evident in the many timber-framed buildings he has built, and in the workshops, he has taught throughout the years. As an experienced timber framer, Neil enjoys sharing his knowledge and techniques for this time-tested craft.  Neil has been an instructor at the Heartwood School since 2005. He has taught at many Timber Framers Guild Community Building Projects over the years, including the Bayles Boat Shed Long Island Seaport and Eco-Center (Long Island, NY), Sunrise Mill hand tool workshop (Schwenksville, PA) and was the Project Manager for Champlain Canal Visitor's Center (Schuylerville, NY). Neil taught a cruck frame workshop at Pingree Campus of Colorado State University (near Fort Collins, CO). Neil also teaches a Timber Frame Workshop at the Hancock Shaker Village (Hancock, MA). Neil instructed with Jack Sobon in the summer of 2021, teaching a Square Rule Workshop on the Island of Gotland in Sweden.