Here is an opportunity to learn the few, but necessary, knots (a dozen or so) needed by the timber framer to safely lift heavy loads and tying off timbers for shipment. Students will practice these knots until they own them. All the elements of a knot, bend, and hitch will be covered.

The rigging of blocks and use of tackle will be demonstrated. You will learn how to construct and adjust a gin pole (luffing) using various rope hitches and tackle. Time permitting, we will show you how to arrange, rig, and raise tripods and shear legs (A-frames) and maneuver a load with a jib-arm. More maneuverable and versatile than shear legs, the gin pole requires more rope and guying points (anchors).

Splicing synthetic and manila ropes for eyes and joining lengths will be practiced. Finding lift points, center of gravity (CoG), and how to secure pieces and bents for raising will also be covered, as well as crane signaling and the basics of crane setup and operations. 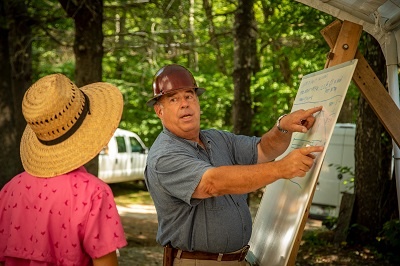 Grigg Mullen Jr. got involved in timber framing in 1994 as a craftsman, engineer, rigger, and event organizer. Since that time, he has worked on numerous projects in both the United States and the United Kingdom. He joined the Timber Framers Guild in 1994, served three terms on the TFG board of directors, and is a founding and current member of the Timber Framing Engineering Council. As a professor of civil engineering at Virginia Military Institute, Mullen has led more than 30 community service projects with students and community volunteers. And he has built at least one Chesapeake Bay deadrise in his spare time.