The Gardener's Shelter at Cressing Temple 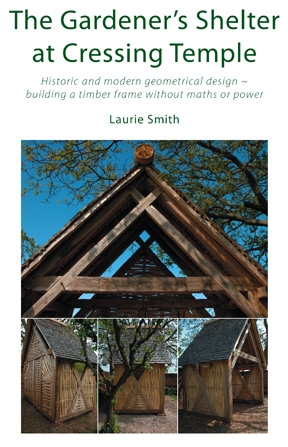 The Gardener's Shelter at Cressing Temple: Historic and modern geometrical design; building a timber frame without maths or power
by Laurie Smith

The gardener's shelter at Cressing Temple (in Essex, England), which stands beneath a walnut tree in the northeast corner of a restored walled Elizabethan paradise garden, was constructed to a geometrical plan, set out at full scale on the ground and cut from green oak in the round, without the use of mathematical calculations, dimensioned rulers or tapes, or modern power tools. The compass-drawn geometrical system used to design the shelter follows the principles of an identical proportional design discovered in the floor and section of the Barley Barn, built at Cressing by the Knights Templar in 1220.

The shelter's frame was scribed, cut, and raised manually from 50-year-old oak sourced from nearby Gosfield Wood, a 72-acre mainly broad-leaved plantation, planted in the mid-1950s on the site of ancient woodland, remnants of which still exist. The project was organized and run by the U.K. Carpenters Fellowship in the week leading up to their annual Frame Conference, held at Cressing Temple in September 2008. This booklet tells the story of the shelter's design and its construction by an international team of carpenters.