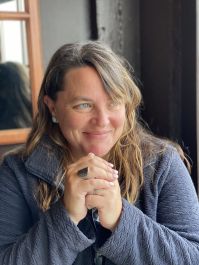 Allison has worked with the Guild since 2016, producing the member magazine, Scantlings, and providing support for events, community building projects, and workshops, along with member support and services. Prior to coming to the Guild, she worked as a self-employed consultant, supporting communities and organizations in the development of concepts into messages and then into solid, successful strategies for reaching new and existing audiences.

Her focus throughout her career has been on the natural resource sector and related industries; this interest came into sharp relief while at American Farmland Trust as Outreach & Project Specialist for the Mid-Atlantic region, where the interdisciplinary nature of her role immersed her in the development and passage of a new program for farmland preservation in the Commonwealth of Virginia. While at American Farmland Trust, Allison engaged the organization with the National Farm Transition Network as part of her work to develop a framework for a comprehensive approach to farmland preservation that included economic development and intergenerational transfer of farms and farm businesses. She continued her work in the agricultural sector upon her return to her native Washington state, serving for four years as the Director of the Skagit Farmland Legacy Program, a county initiative to protect farmland and support the agricultural community. During her tenure, the program emerged as the most successful local program in the state and expanded its work to include policy, planning, and economic development efforts. While at Skagit County, Allison developed legislation and successfully advocated for the Washington State Office of Farmland Preservation.

Allison was a fellow with the Washington Agriculture & Forestry Foundation Leadership Program (2010-2012) and holds a BA from Smith College. She's served as president of her local League of Women Voters and on the boards of directors for other organizations.  She lives in Bellingham, Washington, with her husband and two children, and owns and operates a horse boarding facility in her spare time.