Timber framing has existed as a method of building for centuries. While much is known about the methods and traditions of the craft, there is still much to learn. The Traditional Timber Frame Research & Advisory Group (TTRAG) was founded in 1990 as a council of the Guild to focus on education through the documentation, preservation, restoration, and reconstruction of historic timber frames. 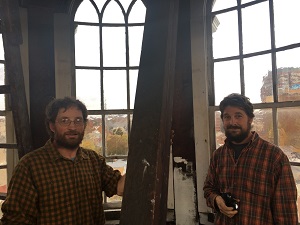 The following goals and objectives were outlined in the group's founding charter (edited here for clarity):

Over the past 30 years, members of TTRAG have worked to realize the goals set forth in the charter and continue this work today. Through surveys, articles, and presentations, TTRAG members share their observations with one another and the wider community of timber framers and historians in fulfillment of our educational mission.

Each year, TTRAG members meet to share original observations of historic timber structures, offering feedback and discovery through a lively and intimate symposium format. These annual meetings are conducted over the course of three days and typically include tours of vernacular framing, with special access that is often difficult to attain on a larger conference tour.

In addition to the members' meetings, TTRAG regularly offers larger conferences that are open to all Guild members and the general public. These events tend to focus on the building history of the region where the conference is held and include speakers with insight and expertise significant to local building history, culture, and environs. A tour of local historic buildings is always a highlight of the open conference.

Membership in TTRAG is for those Guild members who actively pursue a better understanding of historic timber-framed structures and techniques. To become a member, submit these two sets of information:

To maintain membership, each year members are required to attend the annual meeting and make a presentation of original material. If a member is unable to attend a meeting, the annual requirements may be satisfied by either submitting a short survey form to the group or by submitting an article to Timber Framing.

Over the years, TTRAG members have made numerous contributions to Timber Framing, the Guild's quarterly journal. Find articles on traditional timber framing in the index.

Members of TTRAG have published larger works with the Guild including Historic American Timber Joinery and Historic American Roof Trusses. Many of TTRAG's members are accomplished authors and offer publications independent of the Guild. Members have also collaborated on Guild publications, produced a glossary of timber frame related terminology, and developed a bibliography of resources for historic timber frame practices and vernacular framing traditions.

US Secretary of the Interior--Historic Preservation Standards